The Spring Temple Buddha (chinese: 中原大佛 Zhōngyuán dàfú) was the world’s largest statue until November 2018, and has been listed in the Guinness World Records. Depicting the Vairocana Buddha, it stands 128 metres (420 feet) tall from the base of the lotus pedestal. This in turn stands on two structures, the “Diamond Seat” and the “Sumeru Seat” – which, if included, brings the total height to a staggering 208 metres. 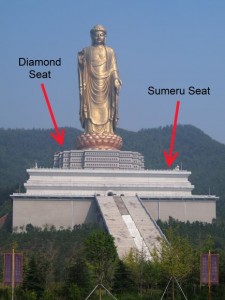 The statue stands on two “seats”, each a multistorey building itself

Despite its record breaking height, the Buddha remains a largely undiscovered wonder of the world hiding away in a remote part of China’s Henan province. On the day the lone traveller arrived, there were only a handful of visitors all day – and no other western visitors. The fact that the statue is a 2 hour bus journey from the nearest town of Lushan, and with Lushan itself being a small town far from anywhere else, the statue may remain in hiding for a while yet.

Situated in what is known as the Fodushan Scenic Area, the Buddha clearly stands out as the main attraction. However there are a couple of other smaller things to see – the Foquan Temple below the statue, the Bell of Good Luck, and for the really adventurous the Yaoshan Fuquan hot spring centre.

Comparison to other statues

The Buddha itself is huge – it is made from 108kg of gold, 3,300 tonnes of copper alloy and 15,000 tonnes of steel, and for an additional cost visitors can go right up and touch its toes to really get a feel for just how large it is. To reach the statue there are two large sets of stairs to climb – each with 365 steps. Additionally, once inside the lower building there are more stairs. In total you will be walking up over 1000 stairs! If that sounds like too much effort then for a small price there is a mini bus that can take you to the top (catch it after walking through the temple). 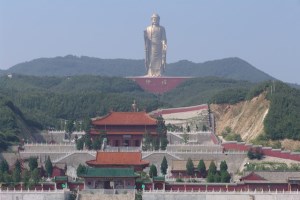 Before the Diamond and Sumero seats are constructed

The construction of the Spring Temple Buddha was announced after the destruction of the Bamiyan Buddhas in Afghanistan by the Taliban in 2001, which was condemned by the Chinese government at the time. The statue was completed in 2008. Further plans were then announced to create the two buildings underneath the statue – the Diamond Seat and the Sumeru Seat, by literally reshaping the hill on which the statue stands. If something is done in China, there are no compromises! Finally, the stairs up to the statue were built. As of 2014, both the Diamond and Sumeru seats are externally finished but internally under construction. It seems that the entire area was constructed with the expectation of enormous numbers of visitors. Perhaps the low visitor numbers are the reason why these two buildings remain in an incomplete state. 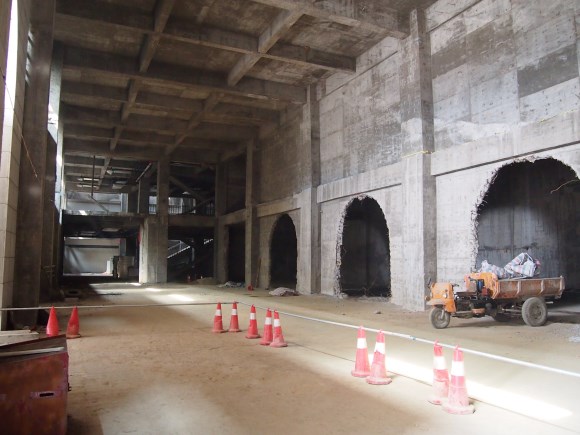 Under construction: Inside the lower Sumeru Seat

The Diamond Seat is an interesting building itself. It is made up of five levels, each containing many small shrines holding small scaled-down golden Spring Temple Buddhas. There are over 5,000 shrines containing 6,666 mini Buddhas! Although as of 2014 the internal construction of the Diamond Seat building is incomplete, tickets are available to enter it and catch a lift up to the top of the lotus pedestal, where visitors can touch the toes of the great Buddha. 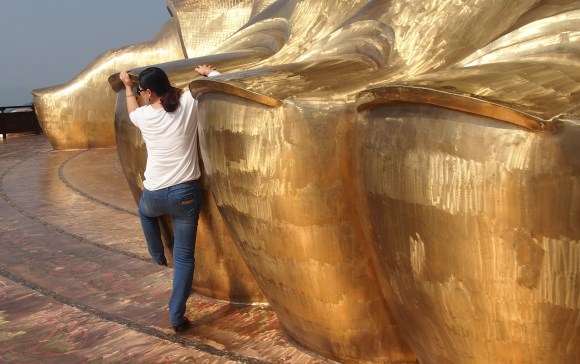 Visitors touching the toes of the Spring Temple Buddha